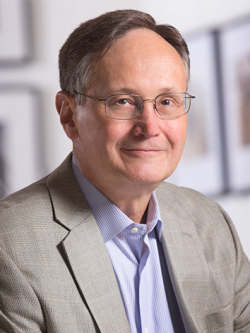 Dr. Muschler is an Orthopaedic Surgeon and Clinician-Scientist at the Cleveland Clinic. His clinical practice that integrates complex adult reconstructive surgery, joint preservation, and bone and cartilage repair.

At the Cleveland Clinic, Dr. Muschler also leads the Regenerative Medicine Laboratory in the Department of Biomedical Engineering, which focuses on stem and progenitor cell biology, aging, tissue engineering and regenerative medicine, and has earned continuous federal funding for over 20 years. He has served as Vice Chair of Bioengineering (2004-2013); Director of the Orthopaedic Research Center (2005-2013), and as Vice Chair of the Orthopaedic and Rheumatologic Institute (2007-2013). Since 2017, he has served as Director of the Cleveland Clinic Joint Preservation Center since 2017.

Dr. Muschler has lead in the development of several multi-institutional collaborative translational networks, founding and leading the Ohio-based Clinical Tissue Engineering Center (2005-2012), and served as the founding Co-Director of the Armed Forces Institute of Regenerative Medicine (AFIRM) (2008-2011), a national network funded by the Department of Defense and dedicated to the accelerated development of improved therapies to serve wounded warriors. He currently serves as Co-Chairman of the Committee on Orthopaedics and Musculoskeletal Cell Therapies within the International Society for Cellular Therapy (ISCT).

Dr. Muschler earned his undergraduate degree in Chemistry at the University of Illinois in Champaign-Urbana, M.D. at Northwestern University, Orthopaedic Surgery residency at University of Texas Southwestern, Dallas, and completed fellowships at Memorial Sloan Kettering Cancer Center and the Hospital for Special Surgery in New York.