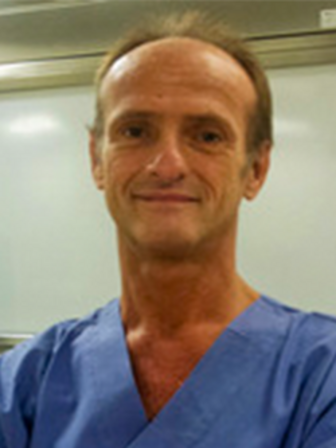 57 years old, born in Turin(Italy) grew up in Milan (Italy) where got the degree in Medicine and the fellowship in Othopaedics and Traumatology. Since 1987 work at Orthopaedic Institute Gaetano Pini of Milan, in the Dept of Knee Surgery and Arthroscopy, until 1997 as assistant ,then as vice-chairman, and since 2010 as Chairman. In 1988 spent 1 year in Burlington,at Dept.of Orthopaedics of University of Vermont,as fellow researcher developing an experimental study on the strain of ACL. In 1989 spent six months at Birmingham,at Alabama Sports Medicine,with Professor Jimmy Andrews and Bill Clancy as fellow observer. He developed an over 30 years experience in knee surgery and arthroscopy and he is able to perform all the techniques involving the knee joint from arthroscopy to total knee replacement. He is the Vice-President of SIGASCOT (Italian Society of Knee Arthroscopy Cartilage Sport and Orthopaedic Technology)