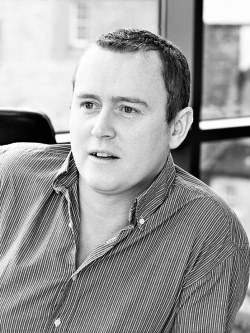 Daniel Kelly is a Professor in the School of Engineering in Trinity College Dublin (Ireland) and Director of the Trinity Centre for Bioengineering. In 2008 he was the sole recipient of Science Foundation Irelands President of Ireland Young Researcher Award (PIYRA). In 2009 he received a Fulbright Award to take a position as a Visiting Research Scholar at the Department of Biomedical Engineering in Columbia University, New York. In 2010 he was awarded a European Research Council starter grant of €1.5 million to develop novel stem cell and biomaterial based therapies to regenerate damaged articular cartilage. In 2013 he was awarded a €1.7m Principal Investigator grant from Science Foundation Ireland to develop novel tissue engineering approaches to treat degenerative joint disease. He was recently awarded an ERC consolidator grant of €2,000,000, making him one of the few PIs to have received two such awards from the European Research Council. Dr. Kelly leads a large multidisciplinary orthopaedic tissue engineering group based in the Trinity Centre for Bioengineering. The goal of his lab is to understand how environmental factors regulate the fate of adult stem cells. This research underpins a more translational programme aimed at developing novel biomaterial and mesenchymal stem cell (MSC) based therapies to regenerate damaged and diseased orthopaedic tissues such as articular cartilage and bone. To date he has published over 110 articles in peer-reviewed journals.