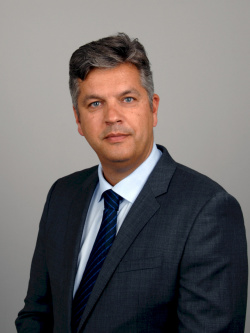 Ronald van Heerwaarden headed the Limb Reconstruction Center and the Limb Deformity
Reconstruction Units of the Sint MaartensClinics and in 2016 he established the Centre for
Deformity Correction and Joint Preserving Surgery in Kliniek ViaSana, Mill, the Netherlands. He
also works as a consultant for osteotomies in the International Knee and joint Centre in Abu
Dhabi and at the London Knee Osteotomy Centre in London.
In the past decade, until August 2014, he was a member of the AO Knee expert group which is
responsible for development of new osteotomy techniques, osteotomy instruments and the
TomoFix plates.
He was appointed Chairman of the ESSKA Osteotomy Committee in February 2016 and currently
serves as Vice-Chairman.
He was a co-editor on the books Osteotomies for Posttraumatic Deformities, Osteotomies
around the knee, and a German book on osteotomies around the knee which was published in a
second edition in 2014. He was a co-editor of the KSSTA January 2013 special issue on
Osteotomies around the Knee. Starting from 2004 he has authored or co-authored more than 100
articles on deformity analysis, osteotomies around the knees and joint preserving surgery. He has
been an invited speaker at osteotomy meetings all over the world.