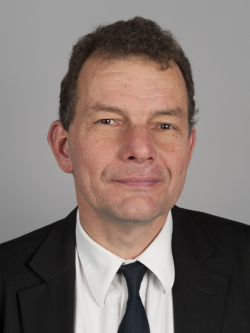 Paul René van Weeren (1957) graduated in 1983 from the Utrecht University Veterinary Faculty (The Netherlands). He became a staff member of the Department of General and Large Animal Surgery in that year and obtained his PhD degree in 1989. From 1991-1993 he worked as a visiting professor at the Escuela de Medicina Veterinaria of the Universidad Nacional in Heredia, Costa Rica. He became a diplomate of the European College of Veterinary Surgeons in 1994. He was appointed as full professor to the Chair of Equine Musculoskeletal Biology in 2007 and is now mainly involved in research with focus areas articular cartilage, tendons and biomechanics. He became Head of the Department of Equine Sciences of the Faculty of Veterinary Medicine of Utrecht University in 2012.
René van Weeren has been a supervisor of 31 PhD students, who have obtained their degree in the past years and currently supervises 10 PhD students, who will be graduating within the next few years. He is an associate editor of Equine Veterinary Journal, member of the editorial board of The Veterinary Journal, and member of the scientific board of several others. He has been, or is, guest editor of various Special Issues or Supplements of a variety of scientific journals. He has been external examiner for PhD students abroad at various occasions in Belgium, the UK, France, Austria, Sweden, Norway and Finland. He is author or co-author of more than 275 peer-reviewed scientific publications and has contributed various chapters to a variety of textbooks. He is one of the editors of the 2nd edition of Joint Disease in the Horse, which textbook has been published in the autumn of 2015.