It is likely that during your trip to Sitges you will not miss out on visiting one of its picturesque beaches. However, whilst you are there, also ensure that you take a walk around the town and enjoy the beautiful surroundings. The town’s narrow streets are filled with whitewashed old buildings, many of which have an interesting history. Sitges has three small museums which are: Museu Romántic, Museu Marical and Museu Cau Ferrat. The Museu Romantic is housed within a grand eighteenth-century building in the heart of Sitges. When built it was one of the grandest houses in the area. It has been maintained and visitors can walk through the game room and the ballroom. The museum also houses a famous collection of dolls. Museu Cau Ferrat was created by the artist Santiago Rusiñol at the end of the nineteenth century. It was built when he put two fisherman’s homes together and filled it with artefacts – including collections of glass and ironwork. It is housed within a beautiful building with bright blue walls and wooden beams on the ceilings. The Museu Maricel was created in 1969 when the old building was purchased to house the private collection of a famous doctor who had an interest in art. Many of the works of art have a maritime theme, which is fitting in this seaside town.

Note: The official Sitges visitor’s site is your perfect guide to this exciting city, and your Hotel Concierge will be pleased to assist you with tailor-made bookings and reservations! 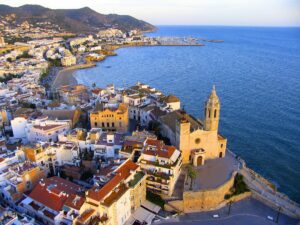 The History of Bacardi Rum

Bacardi is the largest privately-held, family-run spirits in the world, a company which revolutionized rum and the rum-making process. It was founded on February 4, 1862, in Santiago de Cuba as a rum distillery and today the company owns over 200 brands and labels. However, few people know that the story of Bacardi started in Sitges-Spain long before that.

In 1814, Facundo Bacardí Massó was born in SITGES. Son of a bricklayers’ family, he emigrated to Cuba in 1830 when he was 16 years old, following his older brother. After a few months of working with his brother, he opened his own little mercantile shop “Facundo Bacardi y Compañia”. In 1844, he married Amalia Moreau, a wealthy French lady. The couple had 6 children but an earthquake that hit Santiago in 1852 and was followed by a cholera epidemic took the lives of his 2 children Juan and María. Heartbroken, the family temporarily returned to SITGES to recover for a few months and upon his return to Santiago later that year, Facundo found his store plundered, and in 1855, business in Santiago was so poor that Facundo’s first company filed bankruptcy and closed. The family would have to start over.

Soon after, Don Bacardi, who noticed a gap in the spirits market for a premium Cuban rum, bought in 1862 a small, tin-roofed distillery for 3,500 pesos in the city of Santiago de Cuba and he began to experiment with alternative distilling procedures by establishing new innovative steps in the rum production process. He filtered the rum through charcoal to remove impurities, the rum was aged in white oak barrels, taming the harshness found in previous rums, and the final product was the first clear or “white” rum in the world. Facundo’s wife, Doña Amalia noticed a colony of fruit bats hanging in the rafters of the distillery and suggested adopting the bat as the symbol of BACARDÍ rum. Soon locals began to ask for “el Ron del Murcielago” – the rum of the bat. This symbol soon became one of the most recognized brand trademarks in the spirits industry.