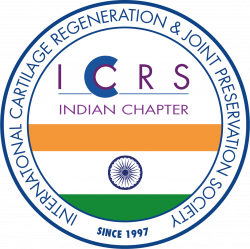 Except few countries, evolution of the ‘Science of Cartilage’ is very minimum in Asia. Formation of Indian Cartilage Society is a milestone for evolution of science of Cartilage in India. The foundation and concept of Indian Cartilage Society was envisaged by Dr Deepak Goyal in 2005 at Ahmedabad, India. The idea was encouraged by Mats Brittberg, who was keen in supporting the development of Cartilage Science in different regions of the world. The concept took further boost during 8th Annual Congress of Indian Arthroscopy Society held at Ahmedabad in 2009. President and Secretary of Indian Arthroscopy Society took personal interest in supporting the “Indian Cartilage Society”. In short span of time nearly 60 people joined the society taking total strength to 65. Members of the society come from different regions of India, ranging from teachers of medical colleges to private practitioners. The member list is growing every week with more and more joining in.

Problems faced in India and Asia

We very well know that results of Total Knee Replacement cannot be compared with Cartilage Repair Techniques. After all, a successfully replaced knee can give an average 15 years, while a successfully repaired cartilage may give whole life of good cartilage. But when it comes to cost, people in this region will not shy away from comparing cost of total knee with that of Cartilage repair. A typical knee Joint Replacement costs in India around 150,000 Indian Rupees (3000 USD). This is much lower than the cost of Joint Replacement in America or Europe. But cost of Chondrocyte culture in a cartilage lab is also around 2000-3000 US in India. ACI cost is further added by two surgical procedures, hospital cost etc. For non-insurance patients, this becomes practically ‘out of reach’ proposition.

Suggestion of Osteotomy (if required), is not well accepted. Post-operative Non-weight bearing option also doesn’t go well with most of people’s mindset.

Concept of “Bone and Joint Decade” was envisaged & implemented in year 2000. The Decade is almost over and lots of work has been done. But facts stand tall, more work needs to be done. How can a Joint work painfree without a nice, congruent and elastic cartilage? European and North American continent, being in forefront of evolving science, are different from other continents. Asia, Africa & South America still have to taste the “sweet flavor of evolving Cartilage Science”.

Though tough, there can be many solutions to above problems. ICRS, being an international body, should focus on the whole world. To be a true international body, ICRS should have equal participation from all the regions of the world. ICRS can year mark next five years to concentrate more on these areas. India has a population of 1.2 billion and is nearly equal to that of China. India and China, both constitute 1/3 population of the world. To have a true distribution of science throughout the world, active interest needs to be generated in Asia.

More and more numbers of Cartilage workshops and seminars should be arranged in India and Asia. Indian Cartilage Society can take a lead, in association with ICRS to have such academic activities in India, South Asia and Middle East Countries. Orthopedic Surgeons, Arthroscopists and Medical Community at large need to be educated about recent developments in the science of Cartilage.

As cost of Joint Replacement is much lower in India as compare to Western World, the cost of ACI should also be comparably low. India and Asia can develop a very economical infrastructure and it already has a good number of intellectuals and resources. Combined efforts can bring down the cost drastically.

More Industry interest should develop in the science of cartilage. Two International companies are already showing interest in India. There are few Indian Companies, who are working hard to take the lead.

8th Annual Congress of Indian Arthroscopy Society organised a “Cartilage Workshop”, on 1st October 2009. This was the first Cartilage Workshop of South Asia. Mats Brittberg, Laszlo Hangody, Ramon Cugat, Deepak Goyal, Arumugam, S J Kim etc were some of the faculties, to name a few. The workshop had lectures on Basic Science of Cartilage Repair, Discussion on ICRS classification, Imaging of Chondral lesions, Presentations of Various techniques like Mosaicplasty, ACI, MACI, 3rd Generation ACI, Cartilage Substitutes etc. There were two live surgeries; Mosaicplasty and ACI. In the end, there were hands on exercises on dry models. Close Alex Models were provided to do various exercises like, familiarization with Cartilage lesion, Grading of Cartilage Lesions, various sites and methods to take Cartilage biopsy. There were Saw Bones/ Cartilage Models to do exercises like harvesting Osteochondral Plugs, Osteochondral transfers, Membrane preparation for ACI and suturing on Cartilage defects, Cells transfer in membrane covered defect, Micorfractures etc. Over 60 delegates from different cities of India attended the workshop. We received excellent feedback from delegates; some of them demanded more such workshops in near future.

Cartilage awareness is not restricted to Arthroscopic community. For the last four Annual Conferences of Indian Orthopedic Association; there is increasing contribution of various speakers on subjects related to Cartilage Science. There has been a good number of “Free Papers” submitted to various conferences in India in last 2 years.

Lot of Cartilage related activities can be seen from Asian Countries like Japan, South Korea, China, Singapore etc. India has now started evolving in the Cartilage Science. Indian Orthopods are highly skilled for various Orthopedic Conditions, and we should see a large number of Cartilage cases and research activities in a couple of years.

Concept of “Bone and Joint Decade” was envisaged & implemented in year 2000. The Decade is almost over and lots of work has been done. But facts stand tall, more work needs to be done. How can a Joint work painfree without a nice, congruent and elastic cartilage? European and North American continent, being in forefront of evolving science, are different from other continents. Asia, Africa & South America still have to taste the “sweet flavor of evolving Cartilage Science”.