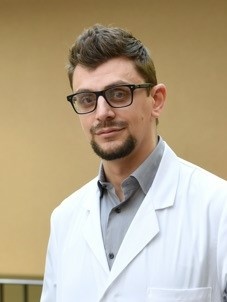 Berardo Di Matteo finished his Residency in Orthopaedic Surgery at the Rizzoli Orthopaedic Institute (Bologna, Italy) in 2016, under the mentorship of Prof. Marcacci and prof. Kon. In 2016 he received the “Schiassi Award” from the Medical Society of Bologna for being among the residents with the highest number of publications in the University of Bologna. He has been an attending Researcher at the Nano-Biotechnology Laboratory of the Rizzoli Institute, and now he works as a Consultant Orthoapedic Surgeon at the Humanitas Clinical and Research Institute, in the “Center for functional and biologic Reconstruction of the knee”. He is also currently involved in a PhD program at the Department of Biomedical Science in Bologna.
His main research interests are in the field of regenerative medicine for cartilage diseases, in particular the application of Platelet-Rich Plasma, stem cells and biomaterials. He has been involved, as an investigator, in a number of multi-centric trials, and has published more than 60 peer-reviewed papers and wrote more than 20 book chapters.
He is an active member of many international societies and currently serves as a Member of the “Next Gen Committee” of the ICRS. In 2010 he was awarded the “ICRS Travelling Fellowship” to attend the ICRS World Congress in Sitges (Spain).”