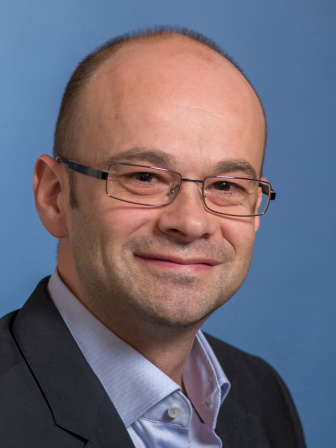 Dr. Martin Stoddart has been working at the AO Research Institute since 2005. In 2020 he become Program Leader for the Regenerative Orthopaedics program, where he also runs the Progenitor Cell Biology & Mechanoregulation Focus Area.

He completed his bachelor studies in Biology at the University of Aberystwyth in 1995. He then spent a year in Davos at ARI where he completed his M.Phil in Cartilage Biology. Between 1996-2000 he carried out his doctoral thesis at the University of Nottingham in the field of Cancer Angiogenesis. He then returned to Switzerland to work in the Laboratory for experimental cartilage research in Zürich, initially as Post-Doc and between 2003-2005 as Group Head. During that time, he also took a 6 month sabbatical at the Centre for Molecular Orthopeadics, Harvard Medical School, Brigham and Womens Hospital, Boston, to learn viral gene transfer techniques. In 2005 he returned to ARI. He is an Honorary Professor at the Medical Faculty of Albert-Ludwigs University, Freiburg, Germany and at the Institute for Science and Technology in Medicine, University of Keele, United Kingdom. He is a fellow member of the ICRS and a Fellow of the Royal Society of Biology (FRSB).

His main focus is the use of autologous stem cells and gene transfer for the repair of musculoskeletal tissues using a cell therapy approach. To this aim he investigates novel cell identification and isolation methods. His research interests include the mechano-regulation of stem cell fate, in particular chondrogenic differentiation. He is also interested in the mechanisms by which stem cells direct cell fate and interact with endogenous cells to effect a repair.

He is the author of over 110 scientific papers and book chapters and is the editor of two books. He is deputy co-chair of the ICRS Basic Science committee and the Chair LearnORS. He is an Associate Editor for Frontiers in Bioengineering and Biotechnology and BioMed Research International Orthopedics. He is a Scientific Editor for eCM Journal and an organiser of the yearly eCM Conference.